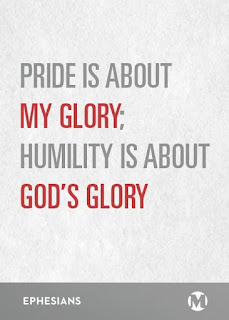 Initially when I thought of someone as prideful, I imagined an arrogant, boastful person whose ego was the size of Texas. That is until I read this definition of pride:

Pride is thinking too highly or too lowly of yourself, just thinking too much about yourself and not enough about God.

We can see pride evident right from the beginning in the garden of Eden with Eve's deception in Genesis 3:1-6. My pastor, Jim Samra, wrote a paper on pride and humility. He says this about Eve

“Of course Eve’s pride is ultimately arrogance. She is in effect saying that she knows better than God what is good for her. But the arrogant aspects of pride are beneath the surface. Eve doesn’t think of herself as more powerful than God. She shows no signs of what we would consider a haughty, arrogant and boastful person. Yet it is still pride. She has no room for God in her thoughts.”

How often do our thoughts drift from God onto ourselves? It happens more often than I would like to admit. This drifting away from God brings us to a prideful place allowing other sins to manifest themselves from this root of pride. It can manifest itself in many different forms like
comparisons, competition, mocking, blaming, ingratitude, bitterness, complaining, manipulation, outbursts of anger, revenge, defensiveness, lack of concern for others, despising authority, selfish ambition, harshness, impatience, perfectionism, and judgementalism.

That is some kind of list. I don't know about you but I unfortunately found myself struggling with more categories than I want to admit. So if pride is thinking too much about yourself, what is humility then if it’s not thinking lowly of yourself?

If pride is thinking too much about ourselves and not enough about God, then humility is thinking about God and ourselves only in relatioin to God. Therefore, the ultimate expression of humility is “not my will but yours be done”.  -Samra

When Jesus wants to teach His disciples about humility he shares this parable. Let’s look at this passage through the lens of humility and see what we discover.

Luke 14:7-11
7 When he noticed how the guests picked the places of honor at the table, he told them this parable: 8 “When someone invites you to a wedding feast, do not take the place of honor, for a person more distinguished than you may have been invited. 9 If so, the host who invited both of you will come and say to you, ‘Give this person your seat.’ Then, humiliated, you will have to take the least important place. 10 But when you are invited, take the lowest place, so that when your host comes, he will say to you, ‘Friend, move up to a better place.’ Then you will be honored in the presence of all the other guests. 11 For all those who exalt themselves will be humbled, and those who humble themselves will be exalted.”

In other words, humility is taking the seat assigned to you whether it’s the best seat or the worst seat. It’s accepting the seat which God, in His infinite wisdom, has chosen for you. Therefore, to be humble is to be content in God’s arms, to know that God’s will is better than ours.

I struggled a lot with failure. But I was measuring my success and failure based on the worlds standards, not on God’s. When my path has taken unexpected twists and turns resulting in trials I didn’t want, I was challenged to ask not “God why is this happening to me” but instead “God, what do you want me to teach me in and through this situation?” By asking this question, I discovered that my success or failure in life was not based on how well someone else thought I did or how well I thought I did, but rather on whether or not I was faithful to the assignment God had given me. Even when that assignment meant walking through the trials and suffering of an eating disorder.

Beloved, our God is a good God who has your best interest in mind. He longs to heal you and set you free which often requires trials and suffering in order to cleanse us from the sin in which we are so easily entangled. Put your hope and trust in Him. He is faithful to complete the work He starts. All He needs is a willing spirit that is focused on God instead of self. Are you willing to surrender yourself to Him today?
Posted by Michigan Eating Disorders Alliance at 7:52 AM No comments:

I don’t really have a problem…Do I?

I don’t really have a problem…Do I?