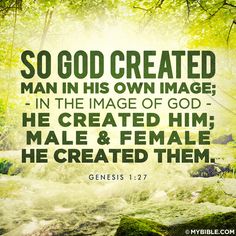 When you think of the word image, what comes to mind? For some of you it may be a physical picture of something like a photograph. For others is may be a mental picture of what something looks like on a warm summer day. Still for others it may conjure up the notion of how a person is viewed by others or themselves.

As with any complex topic, the answers are not straightforward.  As I studied how the word image was used in the Bible, I discovered a few more striking things.

First, the word image was used in only two ways: to describe the image of God or to describe an idol. It becomes apparent that the word image involves the two ideas of representation and manifestation. Manifestation means something that makes clear.  Biblically speaking, God’s image.  Representation means one that is a portrayal of something else, like a statue or an idol.  This is striking because images can quickly become idols if we are not careful.

Second, in Genesis 1:27 it says that we were “created in the image of God”. That is pretty amazing in itself. What that means is that we are designed to reflect God’s image just like the moon reflects the sun. That is our purpose.

Third, I discovered in looking at the Hebrew root words, there are 7 different words used to describe an idol but only one used to describe the image of God. A reminder that while there may be many other things we can worship, there is only one true God.

Fourth, all of these Hebrew words used to describe an image were accompanied by words like graven, molten, golden, fashioned, which implies that these images were created by man and not by God. Don’t we do the same thing when we become preoccupied with creating our own image and how we look to others, both externally and internally?

Fifth, I found that every reference to the word image in the Old Testament outside of Genesis was used to describe an idol. Whereas, in the New Testament, the word image is only used when talking about the image of God. We must be careful not to let our image to become distorted.  The New Testament shares the good news of Jesus Christ and if we focus on Him, we will be less likely to get off track.

So how does this relate to body image? God cares about your physical bodies and how we treat them. God also cares about our image both how we view ourselves and how we appear to others. Problems arise when we disagree or take pride in or credit for God’s design. To despise our bodies or our image is to despise the gift God has given us.  If we are fearfully and wonderfully made like Psalm 139 describes, then that leaves no room for disagreement with our Creator’s design.  Isaiah 64:8 says “We are the clay, you are the potter; we are all the work of your hand.” God has taken great care to design and create you just like the potter does with his clay.  Everyone’s body and image can bring glory and pleasure to God because we are created for His glory and His pleasure.

Remember, our bodies are a temple of the Holy Spirit (1 Corinthians 6:19-20) so we need to ensure that they bring glory and honor to God in the way we care for and view ourselves. Its harder to despise yourself when you think of yourself as a masterpiece created perfectly and intricately woven by God isn’t it? Beloved, dwell on the image of you and your body as reflected by your Creator! Now that is something to smile about!
Posted by Michigan Eating Disorders Alliance at 2:37 PM No comments: